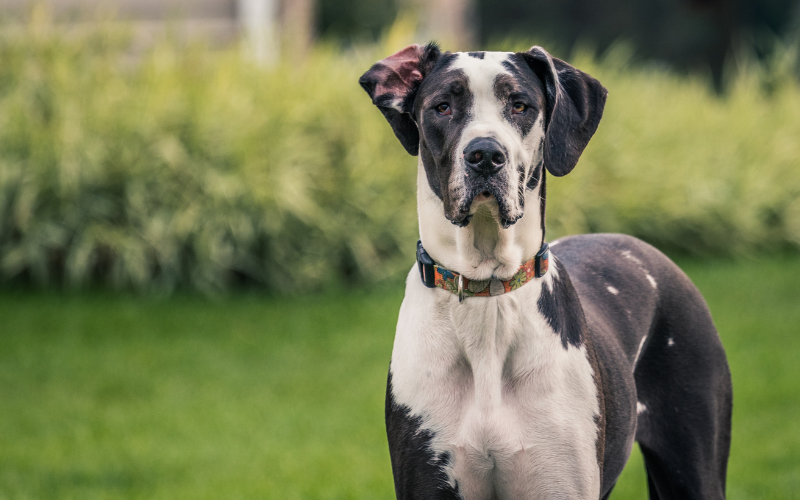 When we think of really big dogs, a couple of breeds will likely make an appearance in our minds and one of those is almost certainly going to be the Great Dane. These leviathans of the dog world can make excellent pets (if you have the space for them) and in this post, we’re going to tell you a little more about them.

The origins of this breed are long, storied and complicated but it’s safe to say that it actually has nothing to do with Denmark. You have to go back to the European traditions of the 16th Century where noble houses often kept large dogs for hunting big animals like bears and boar. These dogs were called English Dogs and were typically crossbreeds from Irish Wolfhounds and English Mastiffs, but over time, they developed into chamber dogs in Germany where the favourites would guard the masters of the house as they slept. When hunting changed in the 18th and 19th century, these dogs were no longer needed and eventually, they became known as German Mastiffs. Then, because no one really liked Germany in the late 19th century, they were given the name Great Dane which comes from a French writer’s “Grand Danois”. Phew.

Tall. This is one of the giant dog breeds and males can grow to 76cm tall, with females reaching around 70cm tall. They’ve got lovely, soft floppy ears, and a charming set of jowls which makes their face appear quite droopy. They come in a wide variety of colours from black and white (harlequin) to yellow-gold (brindle). Also, did we mention they were tall?

Despite their size and their hunting pedigree, Great Danes really are big softies at heart. They can be excellent with children too, and are very affectionate and tolerant dogs that are easy to train.

A big dog usually means a lot of energy and Great Danes are no different. They will need at least two hours of exercise every day and they love a gallop (trust us, it’s more of a gallop than a run) when they get the chance.

And to develop that energy for exercise, Great Danes eat a lot of food (which they should have in 2-3 meals a day). To ensure your Great Dane doesn’t eat you out of house and home, ensure they always have enough and sign up to tails.com and get a recipe made just for them that will be delivered to your door every month – that should save your back from hauling all of that food from the supermarket!