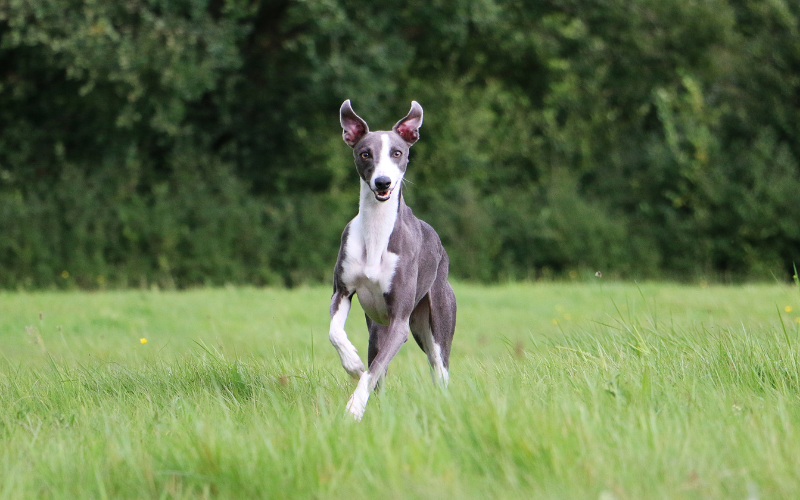 Many people who see a Whippet will think of them as a small Greyhound but this is very much its own breed with plenty of interesting finer points to explore. In this post, we’re going to do just that, so do try to keep up with this little Whippet.

That common comparison with the Greyhound is certainly forgivable considering Whippets were bred from Greyhounds to work as hunting dogs that were a little smaller and more manoeuvrable than their larger ancestors. They hunt by sight and use their incredible turn of speed over short distances to bring down their quarry. Their true origins though may go back as far as Ancient Egypt, as we have seen representations of them in art dating back thousands of years. We say “may” because the Pharaohs may actually have just had small Greyhounds, but as that’s essentially what Whippets are, even if the Whippets of today aren’t direct descendants of those dogs, they’re still pretty much the same thing. The name comes from an old English word for “Moving Quickly” which is very much accurate.

While we could just say “small Greyhound” again, we’ll elaborate a little further. They are slender, long legged, medium sized dogs with short hair. They come in a wide variety of colours, have long, slender muzzles and small-medium sized floppy ears, and a very thin tail.

Despite having the ability to outrun a hare or rabbit, Whippets are some of the most chilled out  dog breeds out there. They aren’t very vocal at all, and are quite happy to spend all day relaxing and laying out. They often look timid and alert, and they absolutely can be, though a lot of that is our humanisation of them. They’re very affectionate dogs too when they trust someone, so expect a lot of licks and snuggles.

Despite being made of long, rangy muscles with very little body fat, Whippets don’t require a huge amount of exercise. A couple of short walks a day, maybe totalling an hour, is all the dog really needs. They like flexing that ability to run, but they are very much sprinters and not marathon runners so if you’re going on a long hike, you may well have to do some dog-carrying with this breed.

While those jaws are now unlikely to be put to work chasing down rabbits, it’s good to keep their teeth in good working order, so why not pick up some of our dental chews to keep their mouth well conditioned?

Meet: The Dalmatian
One of the most instantly recognisable dogs on the planet, the Dalmatian can make a wonderful addition to your home, though there are a few...

Meet: The Greyhound
When you think of a Greyhound, you may well think of racing and six of these animals chasing a mechanical bunny, but it’s also worth...