The age-old story is that cats and dogs are mortal enemies. But that isn’t always the case – they can often be good friends and companions for life. The ideal situation for introducing a dog to a cat (or a cat to a dog) is to start young, bringing a puppy or kitten into your home where you already have an older cat or dog, so that they’re well socialised with each other in the early stages of development. It won’t be without it’s challenges, and it can be tougher with certain dog breeds – for example, collies and terriers have a higher predatory and herding instinct so may not be the best dogs for cats. Read on to learn our top tips on bringing a new dog or cat home, and how to get your existing pet used to their new housemate. 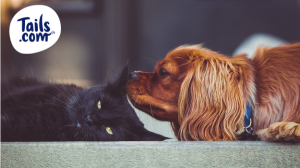 Before you introduce a dog to a cat

If you want to introduce a dog to a cat that’s already in your home, you should start by getting your cat used to the idea – and the scent – of a dog being around. Do you have friends or relatives who own a dog? Invite them and their dog around to your house so your cat can see what it’s like to have a dog in the house.

If you plan to introduce a cat to your dog, do the opposite and bring your dog with you when you visit a friend who has a cat. You can also take your dog on walks where you know there’s a neighbourhood cat you could encounter. Always encourage and reward calm behaviour when your dog sees the cat, and discourage barking and aggression.

In both instances, repeated interactions with the other pet will make your cat or dog more used to them being around, making it easier to bring a new animal into your home.

How to introduce a dog to a cat

The ideal scenario is to start young. Puppies and cats may seem like real opposites, but introducing a puppy to a cat means living with the cat is part of your puppy’s socialisation and has a better chance of the two pets getting along. You’ll need to be careful though, as some cats can have little patience for puppies and their energy, and might swat, scratch or hiss the puppy away. The trick is to introduce them slowly – and always under careful supervision, so that if there’s any agitation you’re there to split them up and calm them down. You might also want to think about leaving the puppy in their crate so that your cat can see them and get used to their scent without directly interacting with them at first.

Move at your cat’s pace

Meeting your new puppy can be quite stressful for your cat, so everything should be done at your cat’s pace. Give them the chance to escape the scenario if they need to – your cat will need to feel secure that the house is still “theirs”, and not that it’s been taken over by the new addition to your family. We recommend keeping your puppy in one room of the house, with your cat having the freedom to move in and out of the room as they please. Cats also get security from being at a height and observing the dog from a distance, so ideally use a room that allows this.

Calmness is also key when you first introduce a dog to a cat. Make sure it’s a relaxed setting, with no distractions or anything (or anyone) that could cause too much excitement – and this may include your children, at least for the first meeting. Encourage and reward calm behaviour from both your puppy and your cat, and with enough peaceful interactions you might eventually find them playing or curled up together somewhere.

How to introduce a cat to a dog

Again, it’s always best to start young. Introducing a kitten to your dog can be a bit trickier than the other way round – a kitten hasn’t reached full maturity and doesn’t have the same savvy to escape or defend themselves like an older cat would. So when you introduce a kitten to a dog, it should be done in a calm and careful manner, and under constant supervision – especially if your dog is particularly excitable. Reward calm behaviour in your dog so that they know what is expected of them.

Your kitten feeling safe is the biggest priority – they’re still getting used to the world around them, and even a small dog could seem like a big, scary creature. A controlled, close introduction is best, keeping the kitten in your hands or in their crate when you first introduce them to your dog so that they feel protected. Let your dog come to them, and take your dog away if your kitten appears frightened.

Curiosity and the cat

Both pets will likely be curious about their new companion, especially your dog. They’ll probably want to get up close and personal, with lots of pawing, sniffing and possibly a bit of nibbling for good measure – all of which should be encouraged. But if such curiosity isn’t reciprocated, especially if one becomes much more excited about the meeting than the other, be ready to swoop in and calm the situation back down.

As before, it may take a few meetings for your cat and dog to get used to each other. With enough patience, calmness and inquisitiveness, they should soon get used to being in each other’s company.

While introducing a puppy or kitten to an older cat or dog has the most success, that doesn’t mean that bringing an older cat or dog into your home won’t work out. The same methods as outlined for younger pets can still work when introducing an adult dog to your cat, and an adult cat to your dog, although you should expect a little bit more resistance at first. Again, it’s all about calmness and rewarding good behaviour, and try to recognise how long it may take for one to get used to the other.

What if my dog and cat just don’t get on?

You should always allow a period of adjustment when you introduce dogs and cats to each other. If you’re introducing adult cats and dogs then it’ll probably take a bit longer than with puppies and kittens. It may take a bit more time with certain breeds, or you may find that they never really become good friends and just tolerate each other living under the same roof. But if after a few weeks your dog is still gunning for your cat, or your cat is still hissing every time the dog comes near, you may have to accept that they aren’t a compatible pair.

If this is the case, there are ways you can diffuse the tension between them – quite literally! Calming pheromone diffusers, collars and sprays are a good method to relax either or both animals. The sprays for dogs mimic the pheromone mother dogs produce to calm their puppies, while for cats it’s the facial pheromone that’s left when they rub their cheeks against surfaces, marking the areas as being safe. For either or both pets, the use of these calming aids can make them feel safe and less stressed, relaxing their behaviour around the other and helping them get along.

A unique recipe of food made just for your dog. Start your free trial for 2 weeks of empty bowls, waggy tails and a glossy coat 🙌
📸: #tailsdotcom

Santa has to think they're as perfect as we do obv

Still need a present for your four legged pal? Add

Want to make your dog their very own Christmas din


Error: API requests are being delayed for this account. New posts will not be retrieved.

A unique recipe of food made just for your dog. Start your free trial for 2 weeks of empty bowls, waggy tails and glossy coats. Share your pics 📸:#tailsdotcom

We're so pleased Marshall approves of his new food 😍
We made him his own unique recipe to help him grow big and strong 💪
Find out more about our food from the link in our bio!
📷: @amykinnon
.
.
.
#tailsdotcom #tailsdogfood #dogfood #dogtreat #happyd… https://ift.tt/37xo7h6