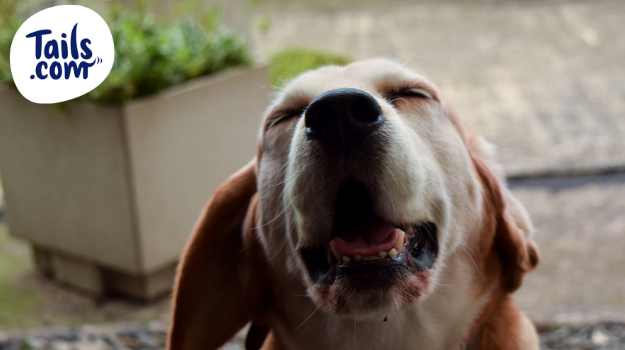 Reverse sneezing (sometimes known as ‘backward sneezing’ or ‘inverted sneezing’) is something that happens to almost every dog at some point in their life. It’s one of those things that looks and sounds more alarming than it really is – which is essentially somewhere between a snort, a sneeze and a cough. In the vast majority of cases it’s really nothing to worry about, no more than you would a regular sneeze. And like a regular sneeze, it’s only if your dog’s reverse sneezing becomes persistent that you might need to seek help from your vet.

What is reverse sneezing?

Reverse sneezing is very similar to a normal sneeze, and usually the result of your dog having some form of irritation or blockage in their nose or back of the throat. Much like a normal sneeze, the reverse sneeze is done to dislodge that blockage. Your dog will usually stand with their nose stuck out and perform a sharp, forceful inhalation – it’ll sound a bit like a combination of a snort and a cough.

Why is my dog reverse sneezing?

There are a few common underlying causes for reverse sneezing, some of which are equally common for normal sneezing too:

Because there are various and unpredictable causes, there’s little you can do to prevent reverse sneezing – simply follow our advice for reverse sneeze treatments when it happens.

What reverse sneeze treatments are there?

If your dog reverse sneezes every so often, there’s nothing to worry about and nothing really you need to do. If their sneezing goes on for an extended period or your dog appears to be in distress, you’ll need to bring them out of the sneezing fit. A simple reverse sneeze treatment is massaging your dog’s throat and lightly blowing in their face. However, if they’re reverse sneezing a lot, such as several times a day or for a few days in a row, we recommend you take them to the vet to be checked out and discover the root cause. For example, if it’s an allergic reaction to pollen in springtime, your vet may prescribe antihistamines like a doctor would for hay fever.

Should I be worried when my dog reverse sneezes?

For the most part, no. Your dog is probably as likely to do a backwards sneeze as a forwards one, and in the majority of cases it’s no more harmful either. It may appear that your dog looks uncomfortable or even like they’re choking while this happens, you can rest easy that this is not the case. Generally, the mouth stays closed during reverse sneezing, and if your dog were choking it would be opening in more of a gagging action. Be assured that choking is rare in dogs, but if they genuinely are you should get your dog to the vet ASAP, and try to feel for and remove the object from the throat if safe to do so.

Which breeds are more prone to reverse sneezing?

Reverse sneezing can affect dogs of all breeds and sizes. But some breeds are more prone to doing it than others. If you’ve got a flat-faced (or brachycephalic) dog, such as a bulldog or pug, reverse sneezing is more likely because of their shorter snouts and narrower airways. Similarly, toy breeds like Yorkshire terriers or Pekingese also have smaller windpipes and narrow airways, so they’re also more likely to reverse sneeze than larger dogs.

4 thoughts on “Reverse sneezing in dogs”