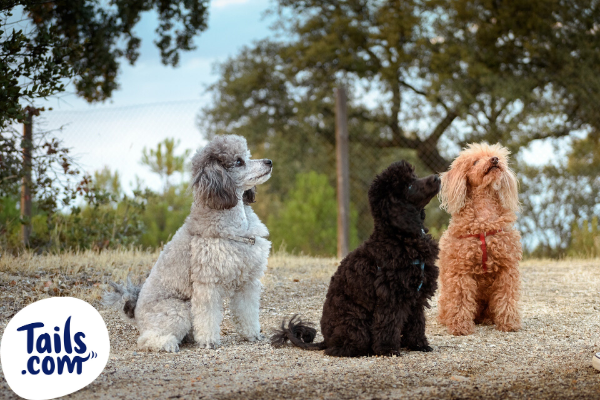 The toy poodle is the smallest of the poodle breeds and is popular among dog lovers all over the world. Highly intelligent and eager to please, these small dogs are easily trained and make wonderful companions.

The poodle is one of the oldest breeds dating back over 500 years. But the exact origin of these adorable pups isn’t known for certain.

Many believe the toy poodle came from France, but historians believe they more likely originated in Germany. It’s thought that when German soldiers took poodles to France during the war, that’s where the poodle became more established as the breed we know today.

Poodles were hugely popular among French aristocrats during the 17th and 18th centuries. And it was during this time they became seen more as household pets, rather than the military dogs they were bred to be. As the standard poodle grew in popularity, breeders selected the smallest dogs of the litter to develop the miniature and toy poodle breeds.

Toy poodles hold an air of grace and elegance, and move freely with a happy gait. This spirited pup stands 24-28cm in height from the shoulder, and weighs around 3-6kg. They have a single, curly, low shedding coat that is often trimmed in a variety of ways. However, today the classic pom-pom poodle cut is usually only seen in the showring.

Since the toy poodle sheds very little, they’re a good choice for allergy sufferers. But with all that luscious, dense fur comes a big grooming responsibility. Poodles benefit from a professional groom every 6 weeks and a weekly brushing regime at home.

Toy poodles love being the centre of attention and thrive in human company. They are smart little dogs and are quick to pick up new tricks, making them an excellent choice for first time dog owners.

Although the toy poodle is loveably sophisticated, they’re also known for being the clowns of the dog world. They love to entertain, and silliness can strike when the mood takes them.

The toy poodle is highly affectionate and devoted to their owners. They’re best suited to households where they’re not left alone all day so they always have the company they crave.

Because toy poodles are doggy brain boxes, they require lots of mental and physical exercise. As long as they get the exercise they need, they’re just as comfortable living in a city apartment as they are in a big house in the countryside.

Toy poodles excel in agility sports and obedience training. They are best suited to short walks, little and often, playtime and a couple of short training sessions throughout the day. It’s important owners put training and boundaries in place from the start. Without instruction, they can just as quickly pick up bad habits and try to rule the roost.

3 thoughts on “Meet: The Toy Poodle”