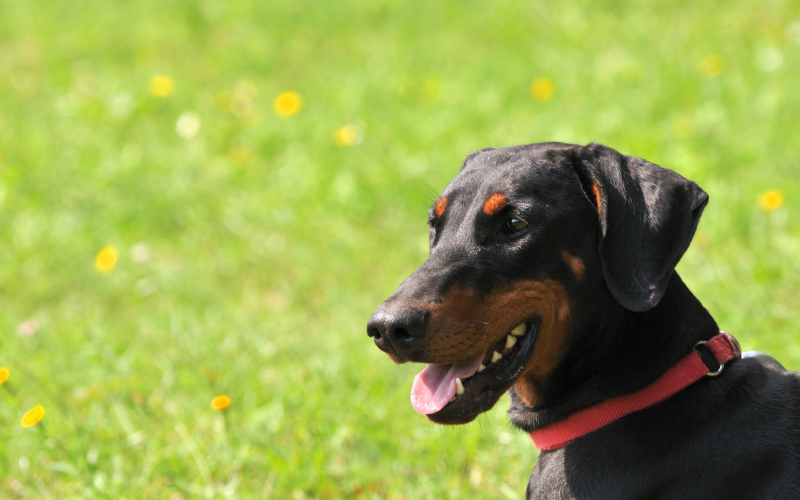 When many of us think of a Doberman, we think of a dog that looks fierce, but do these formidable pooches make good pets? In this post, we’re going to tell you all you need to know about this famous breed.

Relatively speaking (when you consider some dogs have been with us for thousands of years) the Doberman is a very young breed. It was first bred in the 1880s in Germany (and named after its breeder) as a protective dog. Mr Doberman ran a dog pound, and wanted a dog that would protect him, and because one of his other roles was that of a tax collector, he bred his dogs to do just that. During World War II, the United States Marine Corps made the Doberman their official war dog, so it seems they’ve always had a fearsome reputation. They are a very popular breed, especially for owners who employ them as guard dogs, but also because of their intelligence and agility.

Aside from looking particularly scary for a dog breed, the Doberman has a very unique look. They have a very short coat and can grow up to 72cm tall. They have a similar colouration to a Rottweiler and are either black and tan, or red and tan. It has very little body fat, and its tall, muscular frame is instantly recognisable. It has a long muzzle short floppy ears.

These dogs can make exceptional pets if they are trained from young to be so. They are renowned for their obedience and alertness, and their acute intelligence can make them real characters. Rather than going for unknown people or dogs, they will be quietly investigative and alert around strangers, and they of course have a natural guardian instinct, which can make this dog great with children. Just remember that they thrive on training and it has to be the right sort of training if you’re going to bring this dog into your home.

In order to keep those muscles well toned, and of course to use up the large reserves of energy that this dog has, you are going to need to exercise a Doberman for at least 2 hours every day. They like a good run, but make sure you do this in a secure area.

As part of their strict regime and training, it’s important to reward this breed when it has done well, so be sure to keep some of our delicious dog treats close to hand.