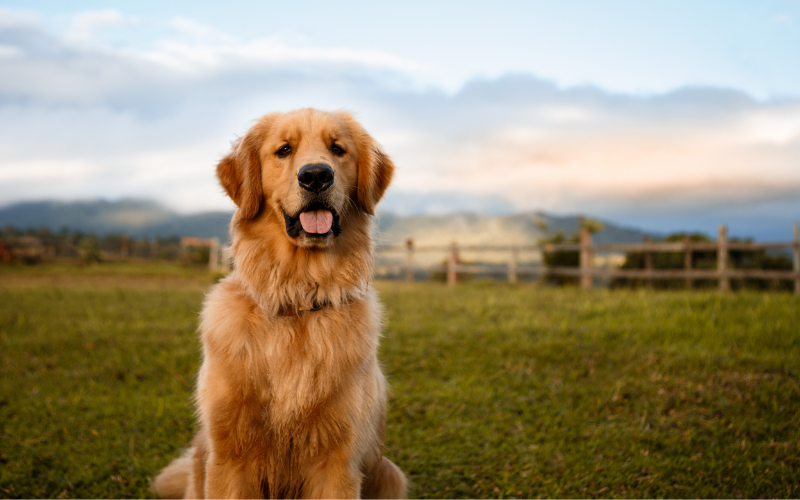 Golden Retrievers are among the most popular pet dogs in the world and are instantly recognisable due to their luxurious golden coats. In this article, we’re going to tell you all about this beautiful breed of dog and what you can expect from one as a pet.

Up in the Scottish countryside, hunting wildfowl was a lot harder than in was in many other places. While many Retriever breeds could cope with fetching downed birds on land, or from water, not many were good at doing both, and in a country where many shooting spots in the mid-19th century often involved bogs, ponds and marshes, this became an issue. The best dogs were bred together and before too long, the Golden Retriever was born. They are excellent swimmers, and their soft mouths made them great at retrieving birds – that’s how the Golden Retriever came to be.

It’s impossible to talk about the appearance of the Golden Retriever without comparing it to the Golden Labrador which many people can mistake them for, and there are plenty of similarities. The key differences are that a Golden Retriever has a much longer, glossier coat, and its muzzle is longer and thinner than those of their Canadian cousins. There aren’t many colour variants compared to other breeds with all of them ranging from light blonde to golden brown along that same section of the colour spectrum. They can grow up to 61cm tall and weigh in at up to 30kg.

Again, like their Labrador cousins, they love water and will make a bee-line for it in any shape or form from paddling pool to river. They are exceptionally gentle and this makes them great with children and even other pets including cats (!). They form great bonds with the families that they belong to and are just bursting with love to give anyone who treats them well. And again, like Labradors, they make wonderful guide dogs for the blind as they’re gentleness and conscientiousness makes them ideal to assist us humans.

Like many hunting dogs, Golden Retrievers love a good run and you’ll need to be able to exercise your dog for around 2 hours a day. They are masters at playing fetch, and they’re also great at leaving the ball when you tell them to (after some training of course).

And to keep those soft mouths in even better shape, it’s worth giving your Golden Retriever regular dental chews to help maintain their teeth and gums.

1 thought on “Meet: The Golden Retriever”