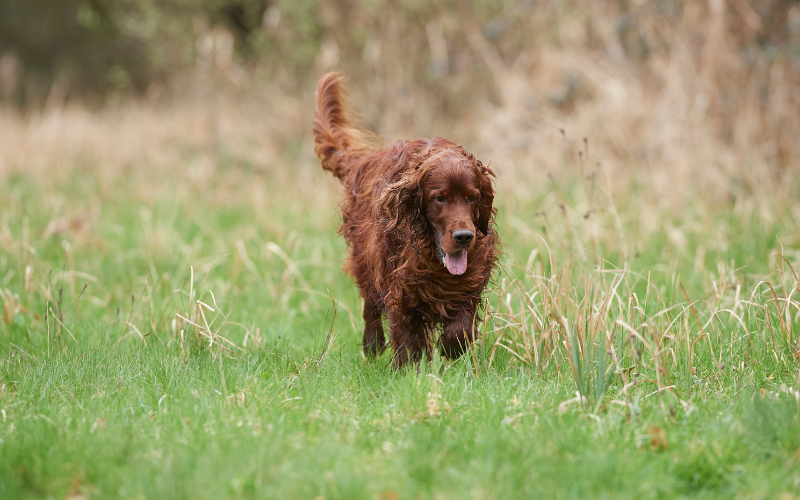 The Irish Setter is known to many of us as the Red Setter due to its deep red or deep ginger  colouration, but the questions is; do these dogs make good pets? In this article, we’ll give you all the details you need to know about this unique breed.

As you may well have guessed from the name, this dog does indeed hail from Ireland where it’s name is Sotar Rua which literally translates as “Red Setter”. The Irish Setter’s family has long roots in the Emerald Isle, but the dog as we know it today was around as early as the beginning of the 18th century where they were used to hunt game like pheasants or grouse. They get their name from their fantastic abilities when it comes to “setting” – an old word that means crouching down when they spot birds. When they spy a bird they’re interested in, they’ll hunker down, shuffle forward, and creep up on the game-bird, leaping at it at the last second. This made the Setter breeds very popular dogs back in those days.

These dogs possess a lovely, long and luxurious coat that is, as mentioned, very much red (though they can have lighter orange coats, especially when they’re puppies). They grow to around 70cm tall, have long, floppy ears and very expressive eyebrows, even by dog standards. While they’re quite good at looking after their coat themselves, they will require grooming from time to time and it’s worth brushing them regularly at home too.

Labrador owners will recognise a lot of the personality of the Irish Setter as the two breeds share a lot in terms of personality. They’ve got bundles of energy and are often in high spirits especially when doing something new. They’re sociable dogs and very patient with children making them excellent family dogs, and they’re usually the dog version of a celebrity when they come to the park as they tend to get along well with all other dogs.

We hope you like throwing tennis balls because Irish Setters need a lot of exercise and they love nothing more than playing fetch it seems. Perhaps they think the tennis ball is a small green bird that needs to be hunted down. These are very active dogs and so you’re going to need to give them at the very least a couple of hours of exercise each day.

These dogs are excellent at being trained too, and if you want to reward them for obeying your instructions, why not reward them with some of our delicious dog treats?

Meet: The Dalmatian
One of the most instantly recognisable dogs on the planet, the Dalmatian can make a wonderful addition to your home, though there are a few...

Meet: The Whippet
Many people who see a Whippet will think of them as a small Greyhound but this is very much its own breed with plenty of...