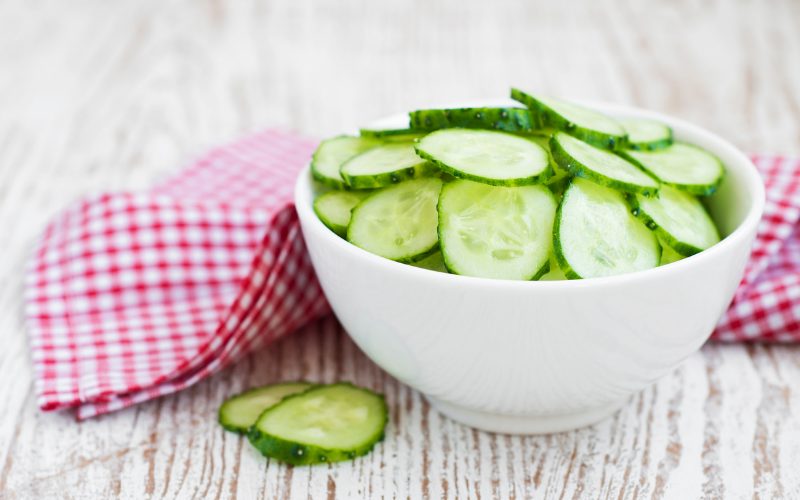 Yes, it is perfectly safe to share some of your cucumber with your dog. There’s really not much to cucumbers aside from their crunch and so you don’t have to worry about any weight issues with your dog if it’s chowing down on cucumber. Nor are there any toxic elements to the skin or what’s inside – there are barely any calories at all so this can make a good snack for a dog trying to shed some pounds.

That being said, it’s not a good idea to make it too regular a part of their diet. They likely won’t get sick if you do, but too much of anything can shake up your dog’s digestive system and that can lead to unpleasant times for both you and your dog so keep it as an occasional treat.

Well, pickles are just small cucumbers preserved in a briny liquid, so in theory, yes, they probably won’t cause any issues if kept as a very occasional treat. That being said, a lot of dogs seem to turn their noses up at the taste of pickle so they won’t be as popular, and the high salt content means they really only should be very occasional. To be honest, it’s best to avoid treating your dog to a pickle just to be safe – stick to the cucumber instead.

And if you’re looking for a healthy treat alternative, take a look at our collection of tasty treats that can be delivered to your door every month – that’ll keep your dog a lot happier than a cucumber.

Can dogs eat pork?
Many a dog owner will tell you that there is something about the smell of pork cooking away in the kitchen that gets their dog...

Can dogs eat potatoes?
One question that we’re often asked here at tails.com is “Can you feed a dog potatoes?” and we’re going to answer that query in today’s...

Can dogs eat a roast dinner?
There really is nothing quite like a roast dinner is there? It’s worth all of those hours peeling potatoes, preparing the meat, chopping the vegetables....