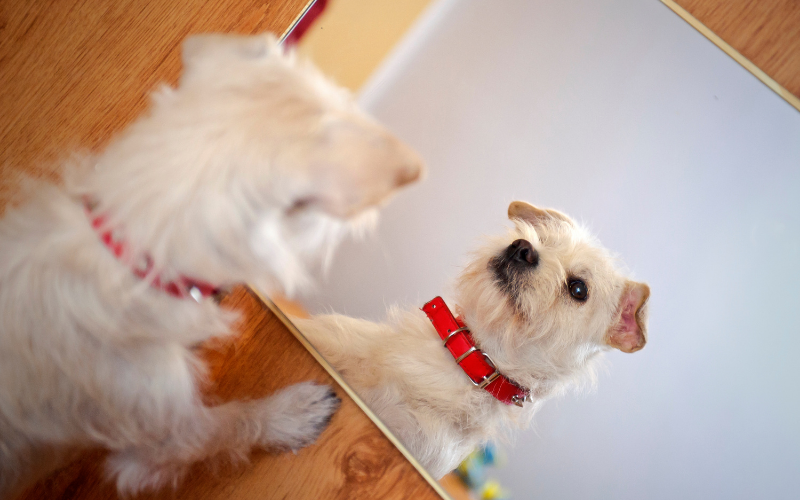 We’ve all had it at least once in our lives when we don’t quite recognise the face we see in the mirror. We’ll notice a receding hairline, a touch of grey in the hair, and maybe a wrinkle where there was no wrinkle before. We think to ourselves “hang on, I was a teenager five minutes ago – when did all of this happen!?” because we are self aware. What about dogs though? Are dogs self aware? Can they tell that the face they’re seeing in the mirror is their own? Let’s find out.

Mirror, mirror on the wall…

Animals and mirrors are an odd combination. A mirror, to them, may as well be a type of magic because this sort of thing doesn’t really exist in their world. True, they might see their own reflection when drinking from a pool or pond, but they probably just think of that as the safe shape they see in the water (as opposed to the unsafe shape which tends to move very fast and has a lot of teeth).

Dogs though spend more time in our world than the wild world so one might assume that they are more used to seeing the magic things that humans surround themselves with, but this doesn’t necessarily track as truth.

In the early 1970s a test was developed by Gordon Gallup, Jr that was called, appropriately, the Mirror Test. The idea was to find a way that demonstrated an animal’s self awareness by taking an odourless dye, marking the animal’s face with it and then showing them a mirror. If they became inquisitive about the mark, then that showed they had a sense of self awareness. It’s an interesting idea but for many reasons (too many to go into here), it was never considered to be the perfect test and the dogs that went through the test did not perform well.

But later on, another team of animal behaviourists tried something similar but instead of using a mirror, they doctored the smell of the dogs’ urine. This might seem strange, but while we are very much a species that relies on our vision, dogs lean far harder on their sense of smell. And in this test, we know from reactions that dogs could tell their own urine from the doctored urine. Does this point to self awareness? Well, maybe. It’s very hard to say – they might have just not liked the other urine smell.

Dogs probably don’t recognise themselves in a mirror. If anything, the most likely thing is that as they get used to living in a world of human magic, they stop worrying about it. A puppy might have a wonderful game with a mirror version of themselves, but an older dog probably just ignores the strange mirror-dog because he can’t really do anything with him except hurt his own nose when he presses it up against the mirror-dog’s nose.

Do dogs have belly buttons?
When you write blogs about animals on the internet, you’d be amazed at some of the peculiar questions that one gets asked. One particularly interesting...

How old is my dog in human years?
We all live for those milestone birthdays, don’t we? Whether we’re just turning 21, or reaching a grand old age with a nice round number...