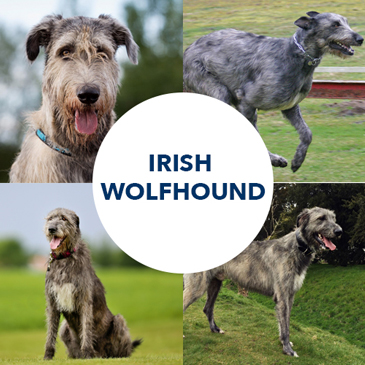 To celebrate St Patrick’s Day on March 17th, we decided to do a special breed post about one of the most beautiful Irish breeds, the Irish wolfhound.

Originally used for hunting wolves and elks, they are now sometimes used in Scotland for herding sheep.

As one of the tallest and heaviest breeds in the world, the Irish wolfhound towers over most other dogs, and can be considered an intimidating sight to some. However you would be sorely mistaken. Affectionate and sweet natured, this breed thrives on companionship. He loves being around people and feels the most calm and happy being a house dog.

As an adult, the wolfhound really needs a good 20-30 minute daily session of off-lead play time to get their excess energy out, and lead walks are equally as important. As sight hounds they will be quick to charge off in pursuit of a squirrel or other small animal, and will most likely happily ignore you as you repeatedly call them to come back.

Be wary not to take him for any exercise one hour before meals, and at least two hours after meals, as large dogs tend to suffer from bloating.

In general this breed has a very calm and relaxed disposition, however they’re inclined to have charming little bursts of silly moments when they decide that they’re big puppies again and just want to play.

As with all dogs, early socialisation is very important. In general, with their relaxed nature the wolfhound tends to take kindly to strangers, and doesn’t really have a guard dog instinct. They are not very vocal dogs and although brave in nature, they are rarely aggressive. However due to their size, any signs of aggression need to be nipped in the bud.

Bear in mind that, with their huge size comes a fair amount of clumsiness. If you have valuable ornaments on display it might be best to keep them out of reach of the wolfhound’s waggy tail.

On a similar note, the wolfhound is very affectionate but does not seem to remember his large frame when trying to clamber up on the armchair with you to watch TV. If not lying on or against your feet, he will most likely try to lie on your lap, and as beautiful as these dogs are, they are also extremely heavy. This is not for everybody, so as well as having enough space in your house for this large breed, also take into consideration how much you value your own personal space!

Feeling peckish? Download a FREE copy of our Healt

By feeding your dog tails.com, you're helping to s

✨WIN✨ We've teamed up with @houndsofeden to gi

Some healthy sweet potato chews for your little co

Take it easy on you 💙 #bluemonday

A treat for them = cheeseburger for us 🍔 Check