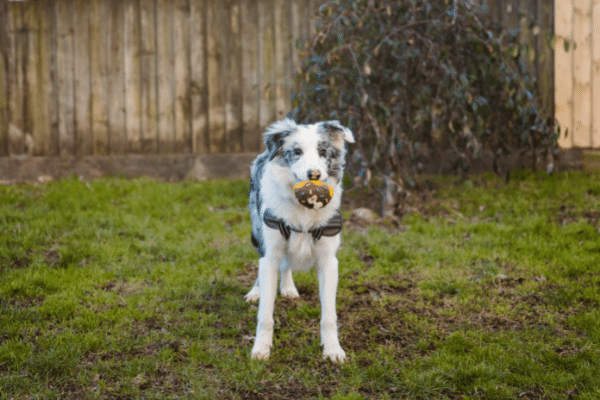 Human beings love ranking their favourite games. From playground games when were a kid, to different sports that we learn to enjoy growing up. Youtube is full of lists of favourite boardgames, video games and puzzles and we have thousands of options to choose from in each category. Ask most dogs what their top five games are, and they’d likely be Fetch, Fetch, Fetch, Fetch, and Backgammon – no wait, it’d be Fetch again. But is playing fetch bad for your dog? Let’s take a look…

What a fine, fetching dog!

Long story short, no, fetch is not bad for your dog. It’s a game they love, it gives them exercise and it helps to strengthen the bond between pet and owner. That being said, there are bad ways to play fetch and that’s something for us humans to be mindful of. So in the rest of this post, we’ll list the ways that you can ensure fetch remains a fun and healthy game for dog and human alike.

For a start, you need to judge if your dog is playing fetch because they want to play fetch, or if they need to play it. Dogs can suffer from Obsessive Compulsive Disorder and this is something that needs to be diagnosed by a professional. But a dog with OCD can become demanding and even aggressive when playing fetch, often refusing to stop despite their obvious exhaustion. If you witness behaviour like this, then you need to consult a vet. There are lots of things that can trigger this issue with dogs and you’ll need to work out what that issue is, and in the meantime, the game should be put on the back burner for a while.

There’s also the matter of what you’re throwing for your dog. Dog toys are made specifically to be played with by canine mouths and are usually perfectly safe. Certainly a lot safer than sticks which can bounce in unusual ways or have sharp ends that can injure your dog. There are some true horror stories out there so don’t rely on sticks – balls and other dog toys are a much better bet.

Lastly, it’s worth thinking about space when you play fetch. You know not to throw the ball near any other people (who may not be fans of dogs) but consider other exercising pets too. Throw a ball too close to another dog and they’ll think it’s for them and this can lead to vicious fight between two otherwise mild-mannered pups. Dogs are territorial beasts after all.

With all of that taken into account, you can go back to playing a good game of fetch with your dog and worry no more about it – just keep all of the above in mind. And to reward your dog for a game of fetch well played, pick out some of our tasty treats today.

6 thoughts on “Is playing fetch bad for dogs?”