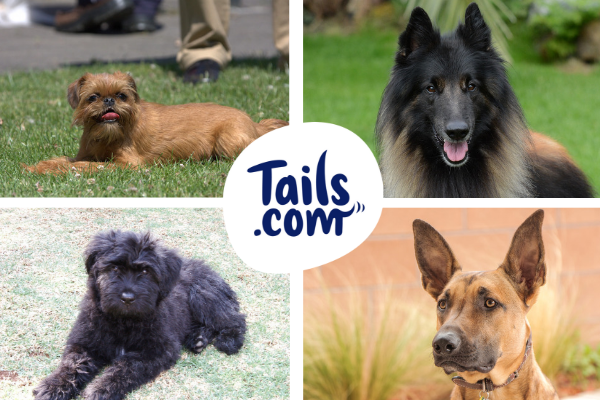 Having met the most popular French dog breeds, we thought it was time to find out more about their Belgian neighbours. Here are six of the most popular dog breeds from Belgium, and a little bit about what makes each one of them so endearing. 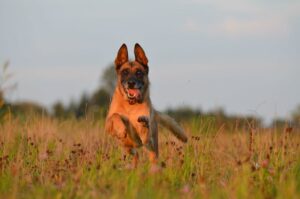 There are actually four breeds referred to as a “Belgian shepherd”, but the one that most commonly takes that title is the Groenendael. Named for the village in which they were first bred, the Groenendael is known for its distinctive black coat (which sheds twice a year).

As the name suggests, they were originally bred as sheepdogs and their “work ethic” is very much ingrained in the breed. They need a job or something similar to focus on, so they continue to work as shepherds but also excel in events like flyball and obedience. Groenendaels bond deeply with their families and can experience severe separation anxiety if left alone too long – even working Groenendaels can’t sleep outside or in kennels away from their families.

Even in domestic settings, the herding instinct is so inbred that Groenendaels are prone to herding their families or other animals. If they aren’t trained that this behaviour is unwanted, your Groenendael might nip at your heels, chase or circle you. 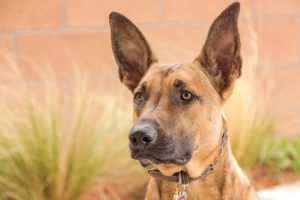 Sometimes classified as a variety of the Belgian shepherd, the Belgian Malinois actually looks more like the German shepherd, with a similarly striking, square build. Predictably, the Malinois was also originally bred as a sheepdog, but today uses its natural skills for protection and detection in different ways.

The Belgian Malinois is fast becoming the dog of choice for law enforcement and security services, especially in the UK, as they’re smaller, more agile and stronger than the traditional German shepherd. Police in North Wales even use their natural herding behaviour to apprehend suspects, with a sharp headbutt to the midriff! Meanwhile in the USA, the Secret Service uses Belgian Malinois to guard the grounds of the White House.

Like many Belgian breeds, the Malinois is named for the city they originated from. But it’s actually based on the French name for their hometown (Malines) rather than the Belgian name of Mechelen. 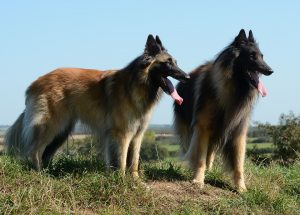 A third variety of Belgian shepherd, the Belgian Tervuren is also named for the area in Belgium it originated from. It’s considered the most elegant of the Belgian sheepdogs, and with a thick double coat in varying shades of mahogany and black, it’s easy to see why.

While they’re known as sheepdogs, the first Belgian Tervurens had a very different job. The foundation couple of the breed were owned by a brewer, and the male pulled a beer cart during the day and guarded the brewery at night. These watchdog instincts have stayed with the breed ever since, and Tervurens are used for police work in their native Belgium.

Their herding instinct has transferred successfully from the field to the showring – the first recorded champion of the American Kennel Club herding championship was a Belgian Tervuren. 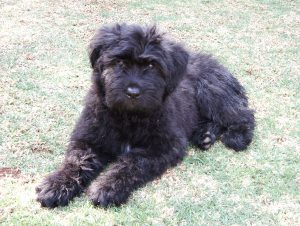 From herding sheep, we go to a dog bred for herding cattle – bouvier des Flandres literally means “cow herder of Flanders”. The breed originated at the Ter Duinen monastery, where the monks crossbred Irish wolfhounds and Scottish deerhounds with local farm dogs until a suitable cattle dog was obtained.

A fully-grown bouvier des Flandres can stand almost 1 metre high and weigh a whopping 40kg (over 6 stone). But despite their large size, they can be gentle and docile with a pleasant nature, and their herd-protection instincts make them protective family pets.

The breed was almost wiped out during the First World War and the damage inflicted in the Flanders region. Fortunately, many bouviers des Flandres served in the Belgian army, and a military veterinarian was able to resurrect the breed from a few remaining dogs. 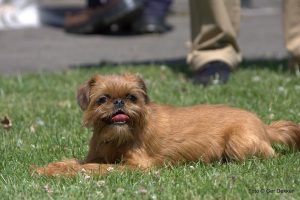 The Brussels griffon (or griffon Bruxellois) is a toy dog that has its origins in the ratters and stable dogs of Belgium’s hansom cab drivers. These local breeds were crossed with imported toy dogs like pugs and King Charles spaniels, gradually developing into the wide-eyed, round-headed Brussels griffon we know today.

The little wire-haired dog seen in van Eyck’s “The Arnolfini Marriage” is thought to be an early form of the Brussels griffon. 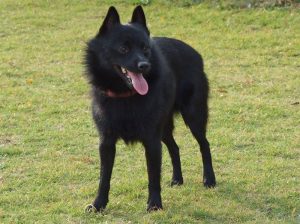 This small Belgian breed is the subject of much debate – is the Schipperke a spitz or a miniature sheepdog? They date back to the 16th century, where they best known for guarding canal boats that travelled between Brussels and Antwerp. Schipperkes were also employed by tradesmen as ratters, and still have that drive to chase rodents and smaller animals today.

One of the best examples of a big dog attitude in a small dog body, the Schipperke has a mischievous and stubborn temperament that has earned them nicknames like the “Tasmanian black devil” and the “little black devil”. They’re headstrong and energetic dogs that often choose to do what suits them rather than following commands. All that energy can get directed in destructive ways, but with the right training and activities, a Schipperke can be a well-behaved friend for life.

In 1690, members of the shoemakers guild were invited to display their Schipperkes (and their hammered brass collars) in the Grand Palace of Brussels, marking one of the first “specialty” dog shows.

If you have any of these breeds in your family, we’d love to hear your stories in the comments. And remember that we can create a unique recipe of food for your dog, no matter what breed, with the right nutrition in the taste they love.

Introducing the top 15 Scottish dog breeds
Think you know your Dandie Dinmont from your Shetland Sheepdog? Your Skye Terrier from your Cairn Terrier? Of course you do. We’re not getting into...

Time for some snoot boopin' 👆

Did you know that by feeding your dog tails.com, y

When your owners finally get targeted by an Instag

Is your dog's name on the list? Or have you got a

We can't believe @lorrainekellysmith and Angus hav